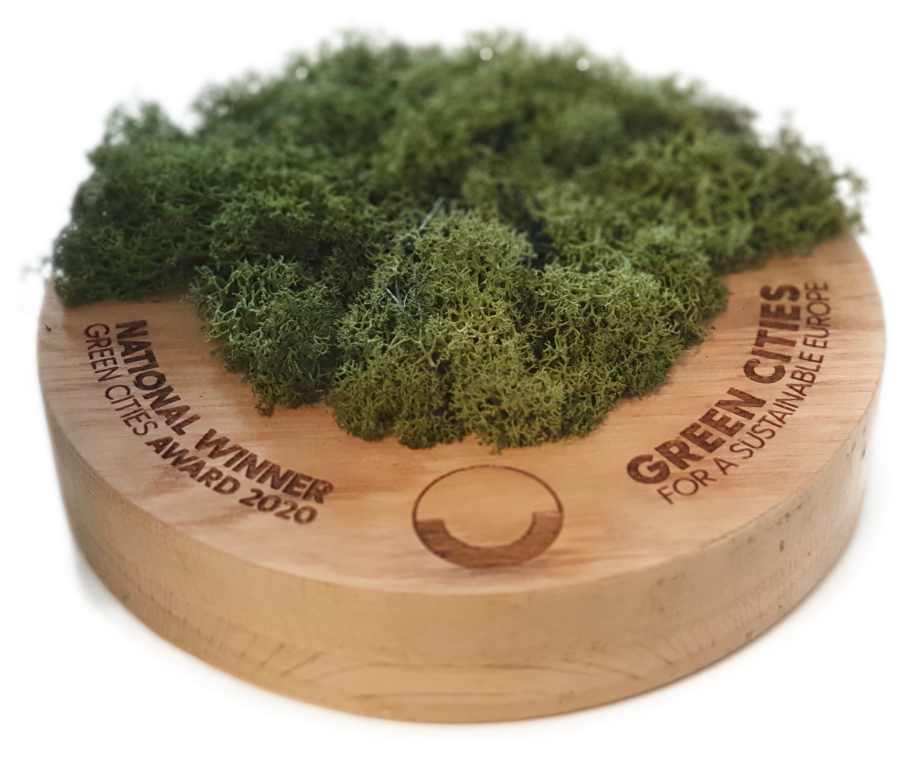 With Gellerup Nature Park, Brabrand Boligforening and SLA have created a new nature-based paradigm for transforming our social housing estates and creating places for all life – social, humane, and biological life. Gellerupparken is an example of modernist planning that transformed Europe’s suburbs during the 1960-70’s. Built to provide its inhabitants with modern amenities, many deteriorated into ghettos with social, cultural, and ecological problems as a result. In Gellerup, a new Nature Park was created as a prototype for transforming these housing estates: From socially challenged ‘living machines’ into socially, biodiverse, and nature-based humane neighborhoods. The resulting Gellerup Nature Park is a new form of ‘social nature’ that restores the natural landscape, and measurably improves the safety, biodiversity, and life quality of the area. Thus, Gellerup Nature Park is not an isolated masterpiece – but a prototype of a new nature-based approach to planning that creates strong and truly social neighborhoods.

The project has measurably increased the feeling of safety and the general social cohesion and public life of the area. Through anthropological interviews and site observations, we have documented an increased sense of internal pride, ownership, and belonging amongst the residents towards their home, which has previously been negatively represented in the media. “The area has changed a lot for us. Many outsiders now come to Gellerup to experience the park. It is good that they can see that what they hear in the media is wrong; they come and see how it actually is. It changes everything amongst us who live here” (male 17-year-old respondent). We also documented a significant increase in residents feeling safe when using the park. Through the extensive citizens’ engagement process, we also managed to include fringe stakeholders in the design process (problematic young men, socially vulnerable people), thus creating a sense of ownership and right-to-be-there in them.

The aim to strengthen the local biodiversity was essential in the design. Through a collaboration with the Nature Historical Museum, we made both a baseline survey and ongoing monitoring of the biodiversity development in the park. In 2017 (before construction), we measured 44 planting species in the park with minimal species variation. In 2019, we planted 164 new planting and tree species and added water streams and a lake (to handle cloudbursts). One year later (in a 2020 mapping), 87 new spontaneous species were registered that had migrated into the park since construction with a wide variety of herbs, grasses, and semi-grasses. Thus: A 570 percent increase in biodiversity in just three years. Furthermore, 23 new animal species have also found a new home in the park – from rare bees to wild rabbits, squirrels, and foxes.

As part of the park design and realization, a new collaborative care and maintenance model has been implemented in the park. The responsinility for care and maintennence of the park now lies with the adjacent plot owners (Brabrand Boligforening, the City of Aarhus, private developers, etc). This new model has severely reduced the cost of care and maintenance (together with the park’s wild nature design which also do not demand intensive care) and has resulted in a collaborative effort to arrange events and activities in the park throughout the year to the benefit ot the local residents as well as the wider population of Aarhus.

Climate resiliency and micro-climate optimization were central themes in the park’s design. By working with open water streams, typography, and resilient planting, the park can withstand and contain a 100-year cloudburst event without flooding the adjacent buildings and infrastructure.

More than 2000 new trees were added to the park. The trees were all specially selected and hand-picked for Gellerup based on their climatic, functional, and social capabilities. The trees were planted to create an optimal microclimate for social activities in the park and effectively handle cloudbursts. The 2000 trees are made up of more than 100 different local and exotic species – a conscious homage to Gellerup’s large ethnic and cultural diversity, but also to make the park more robust and adaptable to climate change.

The park’s main objective was to increase the users’ safety and create new opportunities for shared activities, social events, and informal stays.

Monotonous green spaces, overgrown greenery, and poor lighting created unsafe conditions for the residents. Instead, the monotonous modernistic landscape was reimagined and restored to its original natural and diverse state with softer hills and diverse vegetation and biotopes to create good overviews and a safer environment.

To maximize public life, many programs and activities were added: Ballparks, playgrounds, water plays, pavilions, and informal gathering spots are generously placed throughout the park. Along the building blocks are outdoor eating areas and picnic spots with shared vegetable, fruit, and herb gardens that residents can share for their meals. An extensive lighting design prolongs the use of the park in the mornings and evenings, simultaneously boosting public life, safety, and security.

Selection, origin and quality of the products and materials

The existing 1970s landscape was made up of monotonous green spaces, open lawns, and overgrown scrubs with little variation. The area’s well-fertilized lawns did not leave much room for frugal or heat-demanding species, and the variation in humidity was limited, with no open water present.

Instead, the park was reimagined and restored to its original more natural state while a considerable increase in varied species and biodiversity was added. Thus, the park was designed to act as a ‘missing link’ and biological corridor (re)connecting the two dominant landscape areas of Aarhus, Skjoldhøjkilen and Brabrand Ådal, with each other. The planting was selected to be as varied, diverse, and robust as possible with a mix of local and exotic species – to act as an homage to Gellerup’s ethnic diversity and make the park resilient against climate change.

The park’s other material was chosen to be as climate-friendly as possible, incorporating principles of upcycling and recycling throughout the park as well as using only locally sourced material. Existing soil and stones were kept on-site, with the stones placed in such a way that they provide natural speed-reduction and inbuilt safety measures.

The paths throughout the park were made with in-situ white concrete, minimizing product waste while acting as heat-reducing (during heat waves) and light-inducing (during dark winter months) park elements.

The existing 1970s landscape was made up of monotonous green spaces, overgrown greenery, and poor lighting, creating unsafe conditions for the residents and limiting the potential for shared activities and social cohesion.

The park was reimagined and restored to its original natural state, opening up the social housing area and acting as a ‘missing link’ to Aarhus and a biological corridor (re)connecting the two dominant landscape areas of Aarhus, Skjoldhøjkilen and Brabrand Ådal.

The park design reshaped the modernistic terraced landscape into a softer and gradual inclination, removing the overgrown and unsafe greenery and adding a huge variety of new vegetation and biotopes. The diverse vegetation gives each part of the vast park its own identity, while specific program clusters spread out the park’s activities, giving the inhabitants plenty of reasons to ‘visit’ each other. The entire park is tied together by a new pathway network that provides easy and safe access and movement throughout the park.

Climate adaptation and microclimate optimization are integrated into the park design, handling even severe cloudbursts and stormwater events locally and on-site. By providing continuous, varied greenery throughout the park, wildlife and new planting species are ‘invited’ into the park creating a living and diverse flora and fauna.

The social activities are designed to synergize with the residents’ everyday life. Instead of only creating designated places for specific programming (playground, nature, exercise, etc.), opportunities for play, leisure, and activities are naturally dispersed throughout the park. Thus, residents are encouraged to take small detours and engage in social interactions even when going about their daily lives.

Citizens’ engagement plays a huge role in both the design as well as the maintenance of the park. The inhabitants were regularly consulted and engaged in the design and programming of the park. At the same time, the local inhabitant groups provide care and maintenance, which creates an enormous potential for ownership, engagement, and a sense of belonging – not only in the park but for the entire Gellerup estate.

The impact on the environment

The variety of species allows for a maximum of animals, bees, and insects to find habitat and shelter in the park. Thus, many wild animals have already established their home in the park. In a 2020 registration, 23 animal species were observed in the park, including aurora, bumble bee, Polyommatus Icarus, Calopteryx Virgo, and wild rabbits.

Thus, Gellerup Nature Park lives up to its promise of protecting and strengthening the local biodiversity. And of being a place designed to provide a home to humans, animals, and plants alike – in a new form of urban symbiosis.

Finally, because of the integrated cloudburst adaptation and robust planting schemes, the irrigation need of the park has been reduced by 30 percent compared to similar parks.

Innovative value of the project

Gellerup Nature Park is a new way of using nature and nature-based design to mitigate one of the most ardent social crises facing our cities and societies today: The decay of our suburban housing estates. As a prevalent 1960-70s typology throughout Europe, previous architectural responses to the decay have all too often been the demolition of the buildings and eviction of its (mostly socially challenged) residents.

But this anti-social approach does not solve the deeper problems of our social housing estates and their lack of social cohesion and meaning.

With Gellerup Nature Park, we show how a strong focus on an inclusive design process, a varied and inviting nature framework, diverse programs and integrated activities, and a belief in the deep humane need to feel connected with all living has created tangible and measurable improvements in the safety, biodiversity, and life quality of the area and its inhabitants.

As such, besides the innovative and integrated climate adaptation solutions, Gellerup Nature Park’s most significant innovation is its new model for transforming Europe’s 1960-70s suburban housing estates: From socially challenged ‘living machines’ into socially, biodiverse, and nature-based humane neighborhoods.